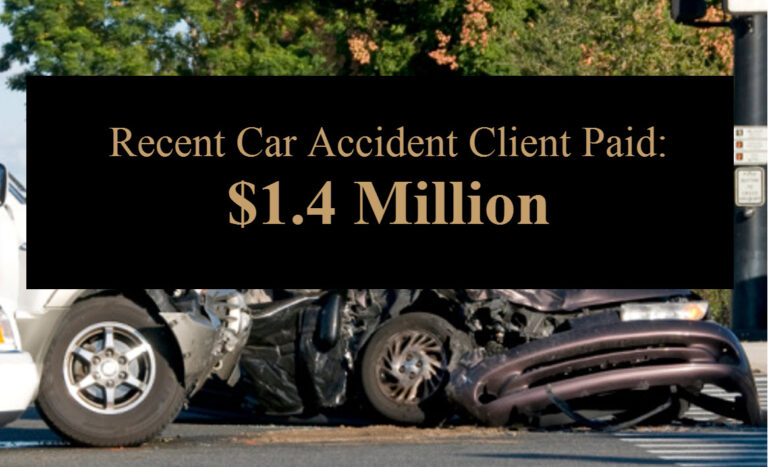 Here are some of our recent car accident verdicts and settlements:

Our client was a passenger in a taxi when the cab driver had an accident.  Our client suffered serious back injuries and ultimately had extensive back surgery.  We achieved a successful 7 figure outcome and successfully negotiated a substantial six figure reduction in her associated medical bills.

Rivers Morrell represented a client involved in a serious head-on car accident resulting in multiple injuries to our client. The client suffered serious injury to the head, shoulder, arm and pelvis requiring multiple surgeries with hardware. The client received compensation for medical expenses, lost wages and the suffering they were forced to endure during the accident and long subsequent recovery.

The client was at a full stop because of a red light. The defendant ran into the rear of the client’s vehicle. The defendant claimed that his vehicle was defective due to “sudden acceleration”. The client eventually had neck surgery, with hardware installed in the neck. He also lost income because of his injuries.

In this case, the client’s vehicle was struck by another vehicle. There were many issues involved in trying to locate and serve the Defendants with the complaint. Initially the defense refused to pay what was demanded. After filing and serving the lawsuit, a demand was again made for a particular settlement amount. The client had multiple injuries, including dental injuries, and epidurals. The case then settled in favor of the client for an amount in the 6 figures.

This was a very difficult case.  The client was riding his skateboard down the middle of the street, at dusk.  Cars had on their headlights and the streetlights were on.  He was in a residential neighborhood, and he was hit from behind by the defendant.  The defendant claimed that he could not see our client until it was too late, because it was too dark to see him in time to avoid hitting him. A witness, coming from the opposite direction agreed that he could not see our client until the last minute because it was too dark. We took a number of depositions and were able to show that the defendant was not paying attention, and if he had been, he would have been able to avoid hitting our client. This is a case that was turned down by a number of others, who saw it as a no liability case. The insurance company adjuster basically only offered nuisance value. Because of the adjuster’s refusal to see the case the way that we did, we filed suit.  The case eventually settled at an amount very favorably, multiple times more than had initially been offered.

Here, the client was walking in the parking lot of a shopping center in South Orange County. She was walking to her car, when the defendant, leaving her parking space, struck the Plaintiff, our client. The client was taken by ambulance to a local hospital. She had multiple complaints, but there were issues in proving whether she hit her head, as there were no medical records to support this claim. Multiple depositions, and multiple defense medical exams were conducted, and at the mediation, the case settled for an amount of 6 figures.

See All Verdicts and Settlements