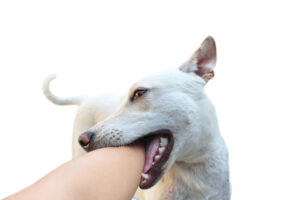 Dog bite wounds are much different from other forms of lacerations. Dogs tend to shake their head during a bite or attack, resulting in tearing injuries and even the loss of flesh and surrounding tissues.  Unlike a cut from a sharp object which leaves a relatively clean wound, dog bites often result in severe and permanent scarring.  In many dog bite victims, especially children, these injuries occur in highly visible areas such as the face, lips, ears, nose, neck and torso.  These injuries often require multiple plastic surgery procedures over time to reduce visible scarring.  Your case should be referred to a plastic surgeon who will develop a short and long term strategy for the repair of the wound, and ultimately scar reduction or removal.

Initially, the plastic surgeon must remove irregular and damaged tissue, as well as that which may have been exposed to infection. The area is thoroughly flushed and irrigated with a saline and/or antibiotic solution.  The plastic surgery will concentrate on preparing edges that may close leaving reduced scarring, and these edges are usually closed systematically and with great precision under magnification.

40 percent of all dog bites result in injuries where there is a substantial tearing away and loss of flesh and tissue. The plastic surgeon must be concerned not only with the conspicuous nature of the resulting scar, but the replacement of missing tissues.

Have you suffered from dog bites scarring and plastic surgery in Mission Viejo, Irvine or Orange County?  We invite you to review the recommendations of our clients and contact us or call 949-305-1400 for a free consultation today.

What Should You Do if you are Injured by a Dog Bite?

Subsequent plastic surgeries and procedures to restore a natural appearance and reduce scarring are initiated several weeks to months after the initial injury. A quantitative analysis of each scar should be performed and extensive documentation is necessary for insurance and legal proceedings.  Each scar should be carefully examined and noted including the length, width, orientation and physical impact of the scar itself.  The Vancouver Scar Scale (VSS) is often used to assess “scar vascularity, height/thickness, pliability and pigmentation.”  Any deviation from “normal” scarring is noted to include pathological hypertrophic/keloid scarring.  Issues of pain and itching (pruritis) should be recorded as well.

Based upon examination and the insight of the imaging testing, the plastic surgeon will create a “surgical protocol” to restore balance, symmetry and to reduce the visibility of scarring.

Scarring may be too severe to alleviate entirely, but advanced techniques in abrasion and sophisticated laser technology allow the plastic surgeon to remove irregularities and flatten any raised area, while altering other features that help to disguise or camouflage heavy scarring.

Secondary plastic surgery procedures are required in nearly three-fourths of dog bite surgery patients, and approximately one-fourth of those patients require additional procedures. The age of the victim, the location of the scarring and injuries and the supportive care provided make a substantial impact on the ultimate recovery and healing of the patient.

The Psychological Impact of Scarring

More than 50% of the children who have experienced a violent dog bite or attack episode will experience Posttraumatic Stress Disorder or PTSD which usually onsets within 2 to 9 months of the initial attack. Symptoms of PTSD are often characterized by withdrawal, sleep disorders, impaired performance at school, and anxiety.  This is especially true for victims with facial injury.

In cases that involve facial scarring, a “re-mirroring” process will be developed by the treating physicians and/or therapists. Patients will need to re-establish the positive internal associations and feedback, known as “mirroring”, that occurs during ordinary childhood development.  The self-image of the patient is often destroyed by the attack and resulting scarring, and the “re-mirroring” process incorporates reassurance by the medical team, counselors, family, siblings, peers after each phase in the treatment plan.  This process can require extensive therapy over a period of years.